The government will bear the charges merchants pay to banks on purchases of up to Rs 2,000 using a debit card, Bhim or Aadhaar.

NEW DELHI/MUMBAI: In a move that will encourage small shops to accept electronic payments, the government has decided to bear the charges merchants pay to banks on purchases of up to Rs 2,000 using a debit card, Bhim or Aadhaar. The subsidy will be available for a period of two years starting from January 1, 2018.
Given that the average debit transaction in India is below Rs 1,500, accepting debit cards will become almost as cheap as accepting cash for small merchants. Announcing the decision taken at the Cabinet meeting on Friday, IT minister Ravi Shankar Prasad said that the government was trying to accelerate digital payment in the country. He added that a committee of secretaries had been set up to ensure that there was no misuse of the subsidy and that benefits are passed on to traders and customers.
Every time a card is swiped, a merchant pays a fee to the bank. This fee is deducted by the bank while crediting the sale proceeds to the merchant’s account and is called merchant discount rate (MDR). Last week the Reserve Bank of India had announced a revised MDR of 0.9% for large merchants and 0.4% for those with a turnover of below Rs 20 lakh per year. 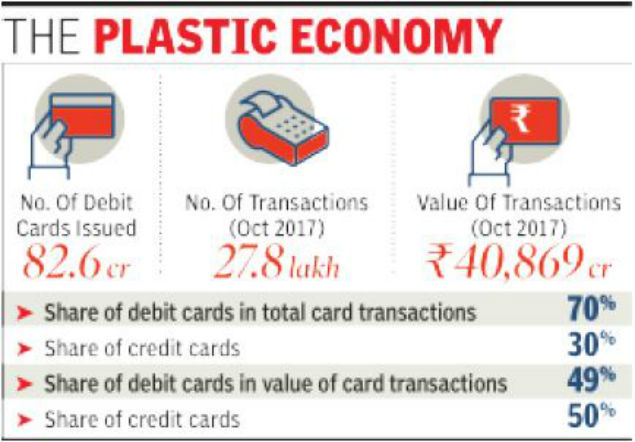 While the charges for debit cards have been waived, payments by credit card will continue to attract MDR.
According to Manju Agarwal, deputy managing director, State Bank of India, for smaller shops credit card charges were not a concern as the bulk of their transactions are through debit cards. “Credit cards are largely used for payments in big retail outlets. The customer base in smaller shops are the ones that largely use debit cards,” she said.
According to Agarwal, the government stands to gain through a shift in payments to the electronic mode as currency printing costs are ultimately borne by the government. She said that banks would now make investments in enrolling small shops for card acceptance. SBI has also made a representation to the government to encourage the use of point of sale terminals (POS, card swipe machines) made in India. Since demonetization, banks have invested close to Rs 1,500 crore in acquiring POS terminals — most of which had to be imported.
Prasad said that from April to September 2017, digital transactions using only debit cards was at Rs 2,18,700 crore. If the trend continues, the total transactions by April will amount to Rs 4,37,400 crore, a 100% increase. “The Rs 1,000-2,000 digital transactions are in the region of 15-20% of all digital payments. Though the total amount is less, the volume is high and around 65%,” Prasad said.

The Cabinet also approved the amount required for such reimbursements for the next two years. Prasad said the provision of Rs 1,050 crore in 2018-19 and Rs 1,462 crore in 2019-20 has been made. Bankers say that given that MDR for the next year is likely to be around Rs 4,000 crore it appears that the government might ask banks to pitch in with the subsidy.
A committee comprising of the secretary, department of financial services, secretary, the ministry of electronics & IT, and CEO, National Payment Corporation of India, will look into the industry cost structure of such transactions which will form the basis to determine the levels of reimbursement.

“Seventy percent of transactions today come from debit cards and those below Rs 2,000 are frequent everyday purchases. Benefits to merchants will be two-pronged — one, they will bear zero cost for electronic debit card transactions and, two, it will reduce the need and cost of handling cash at the outlet,” said Deepak Chandnani, managing director, Worldline, the largest card payment processor. An increase in usage of debit cards will also benefit e-commerce companies who pay a huge price for cash on delivery.

Charges on payments made by Bhim — the new name for the account-to-account transfer using unified payment interface — are lower than debit card charges. However, these are yet to pick up in retail payments as they require both merchant and customer to be savvy in using mobile applications. Aadhaar-enabled payments is also a new mode which facilitates the transfer of funds using the customer’s biometrics. Although Bhim transactions are on the rise, these are largely peer-to-peer payment driven by cashback offers from private wallet operators. According to Agarwal, protocols have to evolve for merchant payments using UPI, including issues around chargeback from the merchant and grievance redressal. However, the bank has decided to sign up merchants for all forms of payment while bringing them on board the cards platform.

Disabled Uttarakhand teacher, known for innovative teaching methods, in the running for US $1 million award

DEHRADUN: Pradeep Negi, a 49-year-old disabled teacher at a government school in Haridwar, who has been using ICT or information and communication technology tools to teach, is among 50 finalists for 2018 Global Teacher Prize, a US $1 million awards initiated by a UAE-based foundation. Negi teaches economics at the government intermediate college BHEL where […]

National Bank for Agriculture and Rural Development (NABARD) Chairman Dr Harsh Kumar Bhanwala has reaffirmed NABARD’s commitment towards welfare of farmers in the country. Chairman NABARD was addressing the gathering after inauguration of new regional office building of NABARD in Uttarakhand’s capital Dehradun on Friday. Dr Bhanwala said bettering the lives of farmers continues to […]