NEW DELHI: Exit polls on Thursday unanimously predicted that BJP would return to power in Gujarat and rout Congress in Himachal Pradesh.

While the polls disagreed on the scale of the party’s victory in Prime Minister Narendra Modi’s home state, not one suggested a close result, with the lowest forecast being 99 seats for BJP in the 182-member assembly.

If these polls are proved right, it would be a huge boost for BJP, which was seen by many to be battling Patidar anger as well as resentment over demonetisation, GST and an agrarian crisis in Gujarat. It would also strengthen the feeling that BJP is set for another term at the Centre in 2019 with the Modi magic still running strong.
Track assembly elections
For Congress, it would spell a major disappointment and could rekindle the debate on Rahul Gandhi’s ability to deliver electorally. 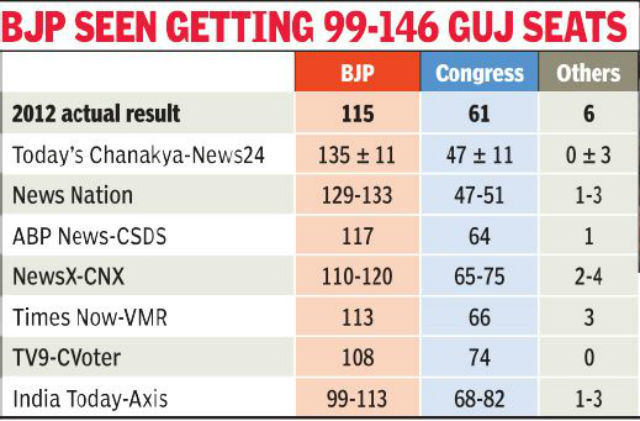 Of the seven polls that were available on Gujarat, three indicated that BJP was likely to get fewer seats than in 2012, when it had won 115. Two of the polls predicted a result very similar to five years ago while the two others indicated that the saffron party would beat its 2002 record of 127 seats in the state.
Most of the exit polls, however, also predicted that Congress would improve its tally from 61 in 2012, though in most cases not by much.
The India Today-Axis poll indicated the closest contest with BJP slated to win between 99 and 113 seats and Congress between 68 and 82. At the other extreme was the News24-Today’s Chanakya poll that predicted a BJP sweep, with the party likely to bag 135 seats and could even end up with 146.

Delhi government’s pilot project regarding reservation at the Guru Teg Bahadur (GTB) Hospital has been shelved by the high court. Under the project, launched on October 1 this year, the Delhi government was alleged to have been giving preferential treatment to the residents of the state admitted to the hospital. The project reportedly reserved 13 […]